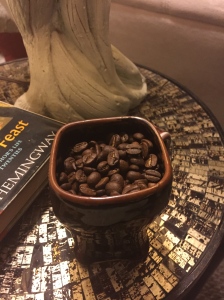 As it is with many relationships, breaking up can be torture. Although I believed coffee and I were over (Breaking Up is Hard to Do), because it mimics gluten, I indulged in a bit of a reunion a few days ago. And it felt so good. Because I’m stubborn and in denial about the new and unjust effects of caffeine on my body, I took a few sips of espresso. Yes, of all things, espresso. I said, if I’m gonna do it, might as well get ridiculous. It made me weak in the knees and butterflies swirled in my stomach, typical of a reunion with a missed beloved.

Except, I quickly realized the butterflies weren’t the good kind. They were pangs of agony, and the cold, hard reminder that coffee and I should most definitely remain apart.

But then, because I just can’t seem to torture myself enough and because denial is an astonishingly powerful thing, I tried a milder coffee blend a couple of days later. I was surprised to find that I tolerated it pretty well this time. Except, after a couple of cups, back to the same problem. So my conclusion is that the strength of the coffee bean is a factor in whether it can impact a person with gluten sensitivity, but amount is also a part of it.

I’m sure I’ll keep experimenting to find the perfect coffee for me (and regret it after), but in the meantime, I’m reconnecting with my first love, chai. But I’m not talking about coffeehouse “Chai Tea Latte,” (which actually just means tea tea latte) with 50 grams of sugar and tons of additives, but homemade chai grounds boiled to perfection, milk added in at just the right time, and spices thrown in.

So far, it’s going pretty well. Rebounds are the best, at least for a little while.