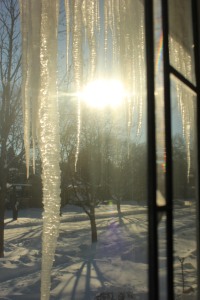 What is going on? This isn’t right. Why’s it dark at 4pm? Why am I sleepy by 8? And also, why is it so cold that the city’s a big ole’ ice rink? I had to check in with someone else to see if I was the only one who was this disgruntled. “Ladybug, what do you feel like doing when it’s cold outside?”

“What a coincidence! Me too.”

And on top of all that, many people’s vitamin D levels drop fast with sunlight deprivation, especially people with darker pigmentation. Although, don’t think this doesn’t affect you, my pigment-less friends. Anyone can be vitamin D deficient.

I have to say though, of all the annoying winter-related inconveniences, the vitamin D thing is what I cared about the least, because I didn’t think it was really causing any problems. But I was wrong. In fact, the more I read about it, the more I think a lot of us are affected. Apparently, vitamin D deficiency can be the explanation for several concerns, like fatigue, poor immune functioning, insulin resistance, multiple sclerosis and depression. So it’s time to pay more attention.

According to researchers, vitamin D deficiency is very treatable. Foods like the ones listed below, supplements and the sun (the optimal and most natural choice) can help increase vitamin D levels:

Many foods are also vitamin D fortified, for example:

By the way, the sun is so vital to our health that there’s a whole website dedicated to it: http://www.sunshinevitamin.org.

I realize it sounds like a terrible contradiction to have to go outside and freeze your tail off in order to feel good, but apparently, it’s completely worth it.

One thought on “Where You Hiding, Sunshine?”